Tying women’s feet was a widespread custom in ancient China, which fortunately fell into disuse early in the twentieth century.

This practice was able to develop because in Chinese men (initially only in court circles) an “ideal of beauty” had postulated that small feet were very “sexy”, especially because of the influence it had on the (wobbly) way of walking. The practice started during the Tang-dynasty (618- 907 A.D.). According to tradition it started with a beautiful imperial concubine, which by nature had small feet. Many fathers and mothers then wanted their daughters to be able to compete with this beauty icon and started to tie their daughters’ feet as a little girl, to make sure that their feet would not become “too big”. Competition for ever smaller feet then made this practice completely out of control.

At the end of the 19th century, a reform movement emerged in China that was strongly influenced by European and American views. These circles quickly came to the conclusion that this Chinese tradition deserved to be thrown overboard. After the overthrow of the empire and the proclamation of the republic in 1911, the practice was outlawed. Apparently, Chinese society was ripe for this reform at that time, because very few girls have been subjected to this torture since then. Of the women whose feet were bound before 1911, or a few years later, few are still alive today. 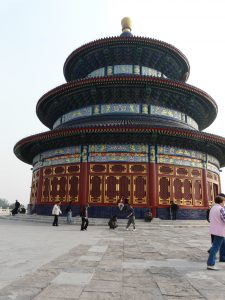 Lotus feet were formed by bandaged with strips of cloth. This daily process was carried out on young girls aged 6 years or younger. The foot was hindered in its growth, and the four small toes were folded inwards and eventually broke by themselves, so that they could be pushed even further under the foot. The big toe remained straight. As a result, the bones were deformed and the toes grew inwards. The feet developed incorrectly, so that the girls no longer needed the calf muscles. All the weight shifted, making walking almost impossible. When the woman was fully grown, she would have feet of sometimes 13-15 cm.

A golden lotus foot was 8 cm, with 10 cm one had a silver lotus foot and with 12 cm one had an iron lotus foot. An extra peculiarity was if the foot had a naturally high instep which made the foot look even smaller optically. Tying feet is very painful. In addition to severe pain, the feet sometimes swell, bruise and inflame. Many women have told or written down their experiences and they all talk about a lot of pain, sadness and powerlessness. On average, 1 in 10 women died as a result of blood poisoning.