The medical term for ‘window legs’ is intermittent claudication, which means interrupted gait. The inability to walk certain distances without pain in the calves, forcing the person to stand still (usually in front of a shop window in order not to be too conspicuous in the street scene, hence ‘shop window legs’) until the pain has subsided, indicates congested arteries, especially in the calves. This is a known complication of diabetes, but also occurs in people who do not suffer from diabetes. The question is what significance ‘shop window legs’ have and to what extent the medical pedicure has a signalling role in the early detection of (severe) vascular ailments. 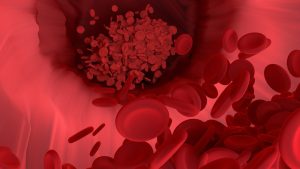 CI is a manifestation of peripheral arterial vascular disease (PAV). Both are caused by the clogging of the arteries: in 80-90% there is atherosclerosis. Atherosclerosis causes a narrowing or closure of the large and/or medium-sized arteries. The constrictions are caused by the development of atheromatous plaques, cholesterol-like silted up thickening of the inner blood vessel wall. This causes a reduction in blood flow, which can lead to ischemia. Ischemia is a lack of sufficient oxygen supply for the tissue behind the narrowing. There is also an increased risk of crumbling fragments of the plaque. Such a piece, an embolism, can completely clog up small end arteries. The image that develops in the foot is called ‘black toe disease’: dry gangrene due to the total lack of oxygen supply directly behind the occlusion. It is important to know that English research has shown that people who suffer from this disease (a ‘black toe’ can develop in 2-3 days), get an infarction within 3-5 years. The underlying cause is, of course, that the blood vessels in the whole body are clogging up and that this does not only exist in the foot. Further medical examination is therefore always necessary in this situation.

Risk Factors
The clogging of vessels occurs earlier and more frequently in people who smoke, have diabetes, high blood pressure and/or high cholesterol, in old age and more often in men than in women. Smoking, in particular, is an important risk factor for the development of CI. You should always ask about this at the anamnesis! Unfortunately, only 15-25% of smokers with CI actually quit smoking. It has been investigated that improvements can be observed objectively with the stoppers: the pain-free and maximum walking distance improves (i.e. the CI improves) and there are also demonstrably fewer amputations, fewer infarcts and fewer premature deaths in this group.

(This Dutch blog was automaticly translated into English)