The content of the care concerns the provision of foot care to patients with diabetes mellitus for the prevention or treatment of foot ulcers, as described (in terms of care content) in the “Zorgmodule Preventie Diabetisch Voetulcera 2014” (Care module Prevention Diabetic Foot ulcers 2014) and the Diabetic Foot 2006 guideline of the Dutch Diabetes Federation (NDF).
The performances to be declared include the total package of activities within the care profiles as described in the said module, insofar as these have been designated by the Zorginstituut Nederland as medical care that can be charged to the basic insurance.

– Funding
Voetzorg falls under the regulations for other medical care (BR/REG-17111) and only concerns performance for diabetic foot. The performance can only be taken into account if the care is not part of an integrally financed care chain for diabetes mellitus, as described in the policy rule “General practitioner care and multidisciplinary care”, but if the care content does meet the conditions of that policy rule. It is possible that the patient is part of a diabetes care chain, but that no foot care is included in that chain.
In that case, the loose performance foot care can be declared.
The performance can only be charged if the entire care profile is or can be provided under the responsibility of the claiming care provider. In practice podiatrists are contracted by health insurers to perform the entire care profile. They often outsource part of the work to pedicures.
The described services are subject to maximum rates. On top of the maximum rate a surcharge can be agreed for the treatment of patients with a higher care severity than the average of the population. The surcharge can only be charged if it is based on an agreement with the patient’s health insurer. The additional conditions that must apply to the charging of the storage can be laid down in this agreement. The surcharge is also subject to a maximum rate. 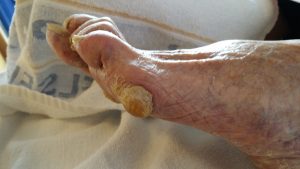 – Regulations as of 1 January 2017
In regulations concerning other medical care: care as general practitioners tend to provide.
The policy rule applies to medical care as described under or pursuant to the Healthcare Insurance Act (Zvw) in so far as the NZa has not established any performance descriptions for the aforementioned care on the basis of other policy rules pursuant to the Wmg.